xmake is a lightweight cross-platform build tool based on Lua. It uses xmake.lua to maintain project builds. Compared with makefile/CMakeLists.txt, the configuration syntax is more Concise and intuitive, very friendly to novices, can get started quickly in a short time, allowing users to focus more on the actual project development.

In this new version, we have made full platform support for the Intel series of C++ and Fortran compilers, and improved the Wasm tool chain support added in the previous version, and also supported the Qt SDK for Wasm.

In addition, we have also upgraded luajit to the latest v2.1 version. In terms of cross-platform, xmake has also made great improvements and added support for mips64 architecture.

On this version, we have made full platform support for the Intel series of C++ compilers, including icl on windows and icc/icpc under linux/macOS.

To enable the Intel C++ compiler, we only need to switch to the corresponding toolchain through the --toolchain=icc parameter on the system where the Intel compiler is installed.

In the previous version, xmake only supported the gfortran compiler. In this version, we also support the Intel Fortran compiler, which is ifort. We only need to switch to the corresponding ifort tool chain to use it.

In the last version, we added the --toolchain=emcc toolchain to support the compilation of wasm programs, but just specifying the toolchain does not adjust the extension of the target program well, for example, for *.js and The file of *.wasm is generated.

In the new version, we continue to add the xmake f -p wasm platform, the built-in emcc tool chain is enabled, and the surrounding configuration has been improved again based on it.

As long as you switch to the wasm platform, xmake will generate *.js and corresponding *.wasm and other target files by default, and additionally generate *.html pages that can load js to run the wasm program.

In addition, we also support Qt SDK for Wasm, for example, we create a Qt QuickApp project.

Here, we noticed that what we created is a Qt project that requires a static link. Because of the wasm version of the Qt library, we need to force a static link to the program to use it normally.

The content of the generated project file xmake.lua is roughly as follows:

In the above configuration, in addition to enabling the qt.quickapp_static compilation rules, we also configure some necessary Qt plugins through qt_add_static_plugins.

Next, we only need to switch to the wasm platform and make sure that the Qt SDK is set to complete the compilation.

After the compilation is completed, xmake will generate demo.html and the corresponding demo.js/demo.wasm program in the build directory. We can open the demo.html page to run the Qt program we compiled. The display effect is as follows:

For a more detailed description of Qt/Wasm, see: Issue #956

We have added a new set_fpmodels() setting interface, which is used to set the floating-point compilation mode and the compilation abstraction settings for the optimization of mathematical calculations. It provides several commonly used levels such as fast, strict, except, precise, and some Set at the same time, some conflicts, the last setting takes effect.

For the description of these levels, you can refer to the Microsoft document: Specify floating-point behavior

Of course, for other compilers such as gcc/icc, xmake will map to different compilation flags.

In order to enable the openmp feature more abstractly and simply, we can set it through the newly added c.openmp and c++.openmp rules. In addition, we need additional libomp libraries on linux and macOS, so we can pass ʻAdd_requires(“libomp”)` for quick reference and integration.

If it is c code, you need to enable ʻadd_rules(“c.openmp”)`. If it is c/c++ mixed compilation, then these two rules must be set.

In the new version, xmake has also made improvements to set_languages, adding new c11/c17 settings, and at the same time adapting and adapting /std:c11 and /std:c17 provided by the latest version of msvc. stand by.

We only need simple settings:

You can enable the c17 standard to compile, even if the lower version of msvc and other compilers do not support it, xmake will automatically ignore the settings.

Regarding this improvement, several aspects are involved. The first is the improvement of the automatic detection of the Mingw SDK root directory under Windows. In most cases, we do not need to configure the --mingw= parameter to specify the path explicitly, and it can also It was automatically detected.

In addition, in addition to Msys2/Mingw as well as macOS, linux/Mingw, we additionally support llvm-mingw this SDK in the new version, so that we can use mingw to compile the program of arm/arm64 architecture.

In addition, in the automatic compilation and integration of remote dependency packages, there are now third-party libraries with cmakelists. Even on the mingw platform, xmake can be automatically compiled and integrated for direct use, which is very fast and convenient.

Recently, in the xmake-repo official C/C++ package repository, we have also added a lot of new libraries that support the mingw platform, which can be used directly .

We have added support for mips64-based Linux system operation, and improved the stability of xmake under arm/arm64. By incorporating the latest luajit v2.1, we have solved many problems left by luajit, such as the bad of lightuserdata under arm64. Pointer and other issues.

Of course, the premise is to run under macOS and use the latest Xcode-beta version that supports the Developer Transition Kit (DTK).

In the official C/C++ repository of xmake xmake-repo, we have recently added dozens of commonly used C/C++ libraries, and also The libraries of the libx11 series are all included. 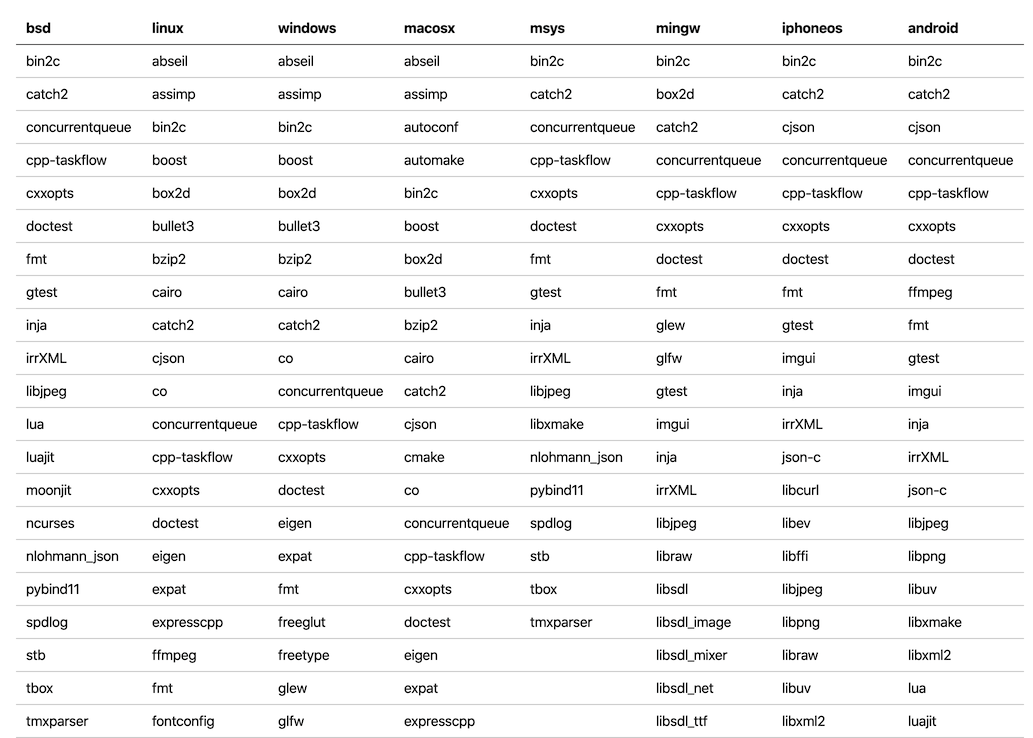 Currently we have included a list of some packages and supporting platforms, you can view from here: PKGLIST.md

We have been working hard to solve the problems of messy C/C++ library ecology and cumbersome integration and use, and provide quick and consistent automatic integration and compilation solutions. xmake not only supports the integration of third-party official warehouse packages such as vcpkg/conan/clib/homebrew, but also We are working hard to improve our self-built official warehouse to achieve a better integrated experience.

Packages with namespaces such as vcpkg::, brew:: and conan:: will automatically switch to the corresponding third-party package warehouse to download and integrate, and the default tbox >1.6.1 etc. Library, the package provided in the official xmake-repo repository will be used by default.

The usage and integration methods are exactly the same, xmake will automatically download, compile, integrate and link.

At the same time, we also welcome more people to participate to help improve the construction of the C/C++ library ecology, and provide a concise and consistent library experience. I believe that C/C++ package management and library ecology are not worse than Rust/Go.

In the new version, we submitted xmake to the Ubuntu PPA source, so in addition to the existing script installation method, we can also quickly install xmake through apt.

At the same time, we also submitted the package to the Copr package management repository, so that we can also quickly install xmake through dnf in Fedora, RHEL, OpenSUSE, CentOS and other distributions.

Next Post LTUI v2.2 released, A cross-platform terminal ui library based on Lua